I’m not sure I’ll be able to blog this frequently once my internship and classes start, but I promise to do my best! Tomorrow is the first day of my internship at TNT Magazine and I’m really looking forward to meeting the staff. I’ve heard great things about the publication and can’t wait to get started.

Since I last posted, I went on a pub-crawl throughout Camden. This area is known for its nightlife and a lot of college students come here to have a good time on the weekends. It’s also a popular spot for tourists (especially American tourists) to “go out” on the weekends. In fact, most of the people I talked to on our pub-crawl were Americans. Oddly enough, I met three guys studying acting from Boston University who are friends with some of my friends from high school. What a small world!

Most of the 30-something students in my program went on the pub-crawl. We started out at The Wheelbarrow, which was a very chill bar with dim lighting from hanging lamps and leather couches set up for hanging out in small groups. There was a small band setting up, but Mumford and Sons was playing over the stereo. This one was by far one of my favorites just because it was so casual. I met some college students from Scotland and they agreed that it was one of their favorites, too.

The second, Belushi’s, was a little more rowdy and crowded. Instead of couches there was a lot of empty space where people were standing around and pushing against one another to get to the bathroom. Not much was happening here.

The third was AWESOME! Its name is Proud and the venue is 200 years old. It used to be a hospital for horses, but now it’s a bar where the distant neighs of horses from the past can be heard. Just kidding. But the stables still do exist in the bar! You can rent one out for you and a group of friends if you want to have a hay-filled good time.

Next we went to a blues bar with a live band. Live bands seem to be a very big draw here in Camden. Many of them are very amateur and just getting their start. But, according to a few sources I’ve read online, Amy Winehouse and Coldplay both got their starts in Camden, so I could be seeing the next great thing.

Last was Koko, which is a nightclub where there was also a live band! Surprise surprise! But this place was more of a huge concert hall with multiple levels for standing and watching the show.

The next day we went on a panoramic bus tour of London. I was happy to be able to see Big Ben for the first time since I’ve been here. It also helped to travel about ground to all of the sites so I can see how London connects for the first time. Usually I take a few flights downstairs to the tube, ride in the carriage and come out to my destination. Our tour stopped at St. Paul’s Cathedral and Buckingham Palace. We were able to get out into the freezing London air and take some pictures. The guards were not changing at the time we were at the palace. They also had coats on because it was so cold, so I couldn’t see their full uniforms. Of course, they were wearing their bearskin hats, and they are just as wonderful in person as you can imagine. The Queen wasn’t in at the time we visited, which our tour guide informed us based on the fact that the Union Jack (or UK flag) was flying. When the Queen is in, her royal flag flies. Not only should you hail the Queen, you should hail her flag, too. 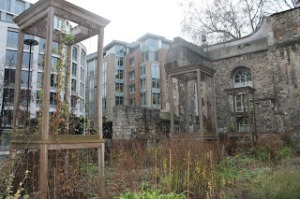 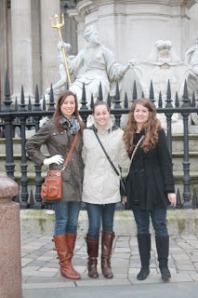 After the tour, we went to visit our friend Jenny from Mizzou who is studying abroad in London this semester, too. She’s living in Notting Hill. We took both the tube and a bus to get to her flat, so we felt very accomplished in our ability to navigate London transportation. (To get around we use Oyster cards, which are prepaid passes for public transportation. They work for both the tube and buses depending on what “zone” in London you’re going to. When you get on and off the tube, an automated voice reminds you to “mind the gap between the train and the platform,” hence the title of this post). We then went to a pub with … you guessed it! A live band! They covered songs by Stevie Wonder and Amy Winehouse and were pretty good. However, I was kind of distracted because the lead singer wasn’t wearing shoes or socks and his feet were relatively close to my face. Nonetheless, we had a great time.

Today we went on a guided tour of Primrose Hill and the Camden Markets. Harry Styles actually has a “luxury pad” in Primrose Hill. A ton of other celebrities live there too: Daniel Craig, Gwen Stefani, Helena Bonham Carter, Jude Law, Alan Rickman, Kate Hudson and more. Unfortunately, I didn’t see any of them. I did see a wonderful view of London from the top of Regent’s Park. 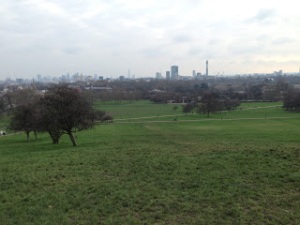 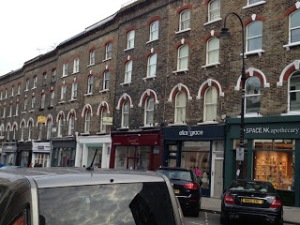 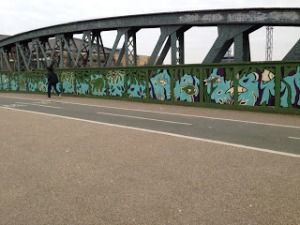 We then walked to the Camden Markets, which were surprisingly close to the posh estates of these celebrities. In fact, the bridge below is very near a row of expensive apartments. The markets are huge and sell all types of specialty clothing and food, and even more kitschy tourist favors. There was an abundance of screen-printed tank tops with Starbucks, Jack Daniels and Rolling Stones logos on them. I think I saw a stand selling these exact same shirts every five or so steps. 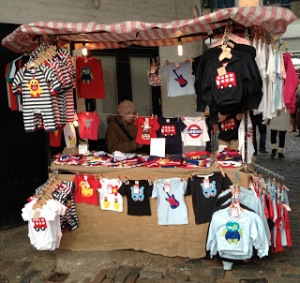 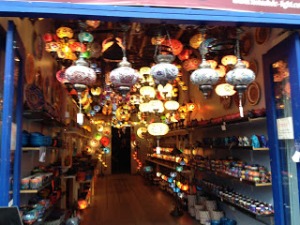 It was incredibly cold for a walking tour. In fact, my core temperature is still sub-zero and I don’t think it’ll ever get back to normal. Despite the freezing wind, it was still possible to smell the ethnic cuisine being sold. There were a lot of traditional Mexican, Asian, Turkish and English stands. Some handed out free samples, but the trickiest were the workers at the Asian stands. They held the samples out on forks and beckoned us over, then snatched them back when we reached out for the nugget of food and asked what we wanted to order. Tricky, tricky.

My roommates stopped for coffee and got cappuccinos with artfully designed cream and steamed milk. I wasn’t in the mood for coffee but the male barista desperately wanted to make a sale off of me (his business must’ve been slow). He asked if I wanted hot chocolate, but I declined after he said it wasn’t for free. Eventually, after I continually denied his offers, he gave it to me for the Camden Markets employee price. Mere pence! Success.

After we defrosted, I mapped out my commute to my internship, which I will visit tomorrow.  The tube is really fast, but it stops very often. I have to switch lines to get to my location and then walk about 10 minutes from the closest tube station. My internship is in East London, which is an area I haven’t seen much of yet. I have class in West London, live in Northern London and work in Eastern London, so I feel very lucky to be exposed to so much of the city.

This week my classes also start, so it’s sure to be busy. I’m ready to start my first full week in London!